Hi everyone. Greetings from New Zealand. I have admired Jaguars from a distance ever since we were lucky enough to have two immaculate red XJ6’s (1 of each series 1 and 2) as wedding cars about 35 years ago. Now I am able to purchase a classic for fun and as an investment. I particularly like the Mark2. The problem I have is trying to find one with verifiable matching numbers, or if not, a known history. I have two I am looking at. A 66 (probably 65 build) 3.4 MOD unrestored but very well looked after. A “New Zealand new” example with only a few owners. The ownership and some mechanical history is known with receipts available.

Also, a 63?? 3.8 auto which is reported to be fully restored approximately 20 years ago. The 3.8, although in obviously very good condition, is a bit of a mystery which I am not able to decipher. I have included the available numbers for both cars below in the hope that some of you would be able to give me some guidance. The details below are the only details I have at this stage.

Any advice would be greatly appreciated.

Hi Tony,
The numbers for the 3.4 look pretty kosher to me, except engine number is probably KJ 6227-8
Ditto for the 3.8 except that I would expect the chassis number to have a BW (Borg Warner) suffix, as it is auto. Only the non-overdrive cars had no suffix, DN for O\D. The gearbox number would seem to be from an auto.
If you want a matching numbers car, you will need to confirm that the actual items in the car match the plate, obviously.

You can confirm the numbers you have by getting a certificate from Jaguar Heritage. It is possible the owners have already done this.

If you send them the numbers you have they will confirm if they are correct. Unfortunately if they are incorrect they will not tell you what the correct ones are, but it is a good starting point.

Neither car is on http://www.saloondata.com/ which is a shame.

Your choice is a difficult one.

My personal preference would be to have an OD manual gearbox as IMO the cars are fun to drive manually and the automatic gearbox isn’t that crisp.

The 3.8 engine would also be my preference over the 3.4. I have a 3.4 auto that was converted to a manual 5 speed Toyota box prior to my ownership. I found it underpowered with the 3.4 and have just built and installed a 4.2 motor from a Mk10 into it. The improvement, especially in low down torque is amazing and it has made a huge difference to the car.

If you have the time and the money isn’t a problem I’d look for a 3.8 manual OD.

Having owned and restored 2 examples of each size, 2.4, 3.4 and 3.8, both auto and manual o\d, I can’t quite agree with Andrew. While there’s no doubt the 3.8 is the quickest and the manual more responsive and fun to drive, I found the 3.4, even in auto form to be a more than satisfactory performer. Remember, today, even the most mundane looking modern saloon will blow the doors off our old dinosaurs, including E Types, you need to accept these cars for what they were in their day. If you want a fast new car, buy one. Also, remember, here in NZ, it is no longer socially acceptable, nor even really possible to go driving around at high speed for any time or distance, so ultimate straight line performance is of little real value. Also, the 3.4 is generally acknowledged as the smoothest of the “big” XK engines, but you might even find a manual o\d 2.4 to be a perfectly entertaining option. Smoother again, and it’s possible to squeeze 30mpg out of one; looks just as good inside and out, and handles a bit better with lighter steering. Cheaper too, if that’s a factor. FWIW 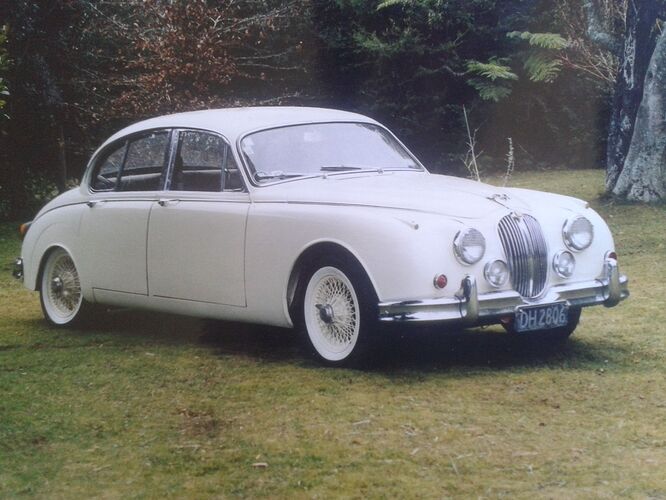 Kevin makes a number of very valid points, and he has a lot more experience that I do with the MK2. I found myself comparing mine with my E Types and their torque based power, possibly an unfair comparison.

Having driven in NZ a lot myself Kevin’s point about your roads is a very good one. With attention to the suspension the Mk2 can be a very nice handling car and good fun on a windy road.

I think that whatever you end up with, you’re going to be very happy, and I can only see the Mk2 prices going up.

Just to muddy the waters a bit more, have you considered an S Type? When I sold my E Type due to a growing family, I, like you ,wanted a Mk2, and while leading up to that point, and immediately after there were plenty available, there were actually none at the time I wanted one and I “ended” up with a 3.4S, all synchro man o\d. What a find; more interior room, bigger boot, better ride and handling, nicer interior and , then, about 2\3 the price of an equivalent Mk2. One of my favourites of more that 2 dozen Jags I have owned.

Also, remember, here in NZ, it is no longer socially acceptable, nor even really possible to go driving around at high speed for any time or distance, so ultimate straight line performance is of little real value.

And here I have to disagree with Kevin, theres always the Targa tour or the VCC time trial attached to Targa to stretch the legs, upgraded brakes would be a strong option to look for though

If you can post the number plates of the cars in question or contact Mark Shorter, if the car(s) were sold from Shorters in Auckland then he would probably be able to tell you who the original owner was!
And welcome to the forums.

As Robin points out, there are organized events where you can excercise your car, but for the comparatively few occasions you would do that, would that be a worthwhile consideration? I had a workmate who bought a Toyota FXGT back in the '90’s and then proceeded to rip out the aircon, electric windows, standard suspension and fitted race seats and rock hard suspension for the fractions of a second he would gain on the two car club hillclimbs he did a year. When he went on an out of town journey, he had to take his girlfriend’s car as his was virtually unusable on the road.
But, if you want a Jaguar, buy what appeals to you, that’s what really matters. Just don’t overlook what might be a better choice.

Thanks Kevin. Yes I have also considered an S type. I know of a nice one available. Same money but in much better condition. Head says S type but the heart wants a Mk2

Mk2 it is then! Just buy the best you can find and afford. IMHO, get one that’s as original as possible, no rack and pinion steering “upgrade”, 5 speed 'box etc etc. Upgraded brakes maybe, although I’ve never found the standard ones lacking, but hopefully they could be returned to standard at some later date if required. I don’t know if you are bothered by matching numbers, but I personally would prefer one that is much as it came from the factory, as in correct engine size, correct gearbox type (not auto converted to manual) That can be spotted in an instant by the depth of the centre console and tunnel size. IMO, if you have o\d, there’s no point in a 5 speed, in fact o\d is preferable as it changes in and out faster than a manual( for overtaking for example) FWIW , a 3.4 auto Mk1 has much the same performance as an S1 4.2 XJ6 auto, so no slug. Mk2 3.4 is slightly slower, but not much. Somewhere down the track, I think original spec cars will be more desireable than cars that have been mucked around with, but I’m a purist.
Good luck.

Head says S type but the heart wants a Mk2

Sure it has a proper IRS but it’s arse is just… ugly.

Mk2 it is then! Just buy the best you can find and afford

I agree entirely. An original MK2 will always be a joy to drive and will increase in value.

I am able to purchase a classic for fun and as an investment.

The only possible appreciation a MKII “investment” will provide is an increase in your happiness. 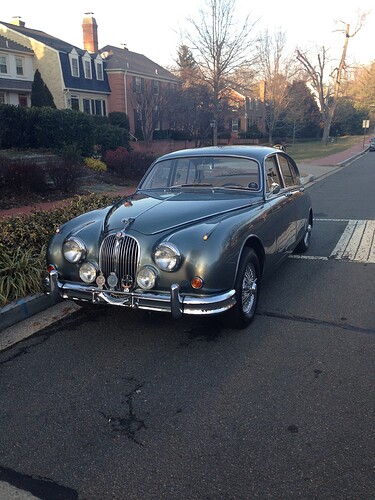 I’ve never driven any of the other variants, so can’t compare them from a performance perspective. But I agree with Kevin, a Prius will out perform a MKII. So given modern standards, performance probably shouldn’t be a selection criteria. That said, the old adage about Grace, Pace, and Space still applies, and nothing much compares.

Mine is a 3.8 manual with O/D. I’m the second owner of this numbers matching car, have the records since it was new, and even know the original owners. It will never be worth the money I’ve put into it, but the enjoyment factor is off the charts. So I say buy the one that speaks to you, and unless DIY restoration is your personal hobby, buy the very best one you can afford.

I have a mk2 , 420 and S3 XJ6 they are all different and so enjoyable in very different ways! (but should never be treated as an “investment”)

Why not a MK1, more classic look, same road feeling.
Late version also came with a 3.4 and overdrive, and Disc brakes. 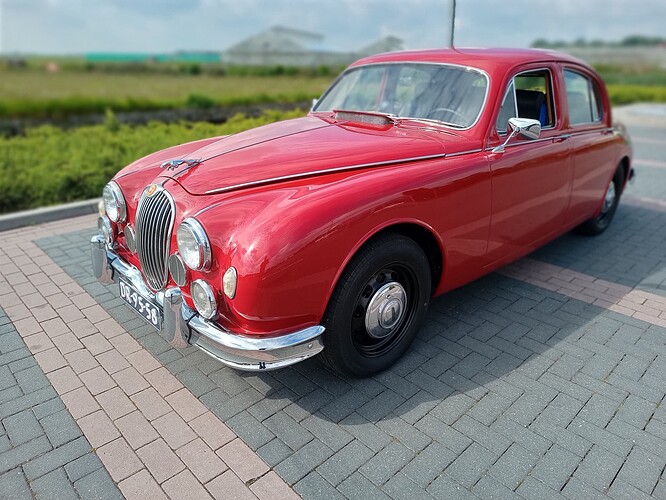 a Prius will out perform a MKII.

My two Jaguars are used for somewhat longer drives, my usual transportation is a pair of 37 HP Morris Minors that are always slow and in the way of modern impatient in a hurry drivers in modern cars. I think my driving style and slow cars are going to be obsoleted off the roads. Is there any respect left for antiquity? 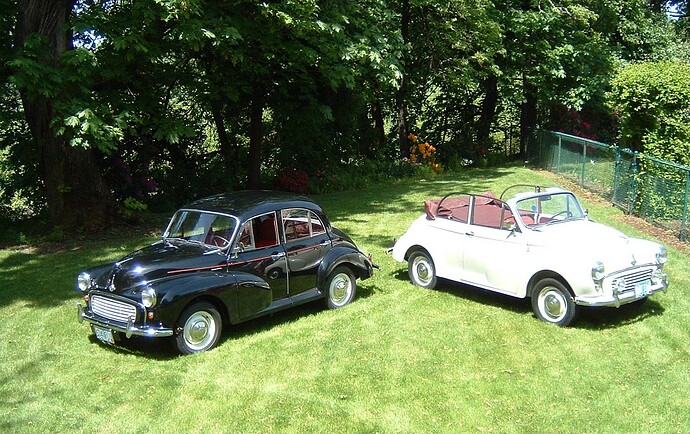 A Mk1 of either engine size is almost unattainable in NZ; the only ones that come up for sale ( in the usual places, that is) are project cars in the most extreme sense of the word. I’m not sure how true this is, but I have heard that the Mk1 was built to a higher standard than the Mk2, Jaguar had issues with Pressed Steel Fisher not producing MK2 shells to the agreed standard, fewer spot weld,etc. I guess you got a bit more car for your money so there had to be a trade off somewhere.
I’m not sure I agree with the notion that these cars are not investments; as far as I can determine their values have, at least, kept up with inflation. I paid $5000 for my 3.8 E Type in 1976, equivalent to 1 year’s salary, sold 5 years later for $10,000, again 1 year’s salary. Ditto S Type, cost $3,500 in 1981, would currently be worth 10x that. I’ve seen no sign of them dropping, just slow inexorable rise.
Killer 58, that is a car to covet!