Well…I’m back…AGAIN. Seems like this Jag ownership thing gets in your blood and never goes away. I thought I was finally done when I sold off my 85 XJ6 (Montana barn find) to the Top Gear threesome so they could finish up filming the Telluride, CO episode a couple of years ago. I guess I should say “Grand Tour” these days since I see the BBC rebooted Top Gear with some new fellows although I haven’t watched it yet. It was amusing watching my XJ6 ski down the slopes with Richard Hammond at the wheel. Fortunately, it survived the “downhill” with minimal damage near as I could tell. Someone out in western Colorado owns it now and I hope they are enjoying it.

Having owned three Series III XJ6’s and two XJ-S cars I had pretty much had my fill of 1980’s Jaguar maintenance issues. So, I decided to muck about with old SAABs for a change of pace. Currently have a 1991 SAAB 900 Turbo Convertible which I have been enjoying. Alas, my wife has been making repeated comments of late on how she misses “Goldie”, our 1990 XJ-S Convertible. And then I made the mistake of setting up a Craigslist search just to see if something interesting came around. Less than a week later…up comes a black 1990 XJ-S Convertible at a good price, 77K miles, and only a 2 hour drive away. Yes, we bought it. As I was following my wife home I was looking at the car and thinking…damn, that sure is a beautiful car. It’s 30 years old but the design and styling is simply timeless.

So, here we go again. Time to get reacquainted with my old friend the V12. The car seems to be in quite good shape though, runs well, and appears to have been properly cared for. Originated in Denton, TX and three years later moved to Loveland, CO where it has spent the last 27 years cycling through a number of owners. At least one of which was a JagLovers member, as there were some printouts stuck in the included service manual ( a shout-out to you for taking good care of it if you are still on the List).

First order of business will be to replace the top as it is no longer weatherproof. This will be a new experience, hopefully not too painful.

Yep: you got it bad, apparently, the incurable form of the disease…

I’ve only had my 88 XJS hardtop 5.3 V12 for 1 year. As I work on her, I sometimes curse the engineering or deal with my sore joints and stiff back.

But then I take a good look at her at different angles, and appreciate what a beauty she is, then turn that key and hear the V12 come alive. I was thinking about a convertible at one point, but I am really loving those flying buttresses more and more. Very unique and gorgeous.

My XJR-S is in the bodyshop at the moment - new front wings, a repaint for the front & rear bumper covers, rear spoiler, other cosmetic bits. I know that it is away in a safe place, and being fixed, but I feel tetchy every time I look at the garage and don’t see it there.

I’m likely an outlier, here: after selling my E Type in 2016, after having had it/around me for 51 years, plus having worked on a metric f**k-ton of others’ Jaguars… I don’t really miss it/them.

Still appreciate them–for what they were, and are–and still enjoy helping others feed their addiction --coffcoff @69Cat coffcoff-- but do not miss it too much.

Happy with the Rover!

I was standing in the garage last night and the two (C900/XJ-S) were parked next to each other. Both are black and tan so they make quite the pair. I was struck by the complete contrast in character between the two. The SAAB is higher off the ground, much more “forward leaning” and anxious to get moving…come-on “let’s go”. Whereas the Jag is lower, sleeker, and more leaned back, in a “let’s cruise” attitude. 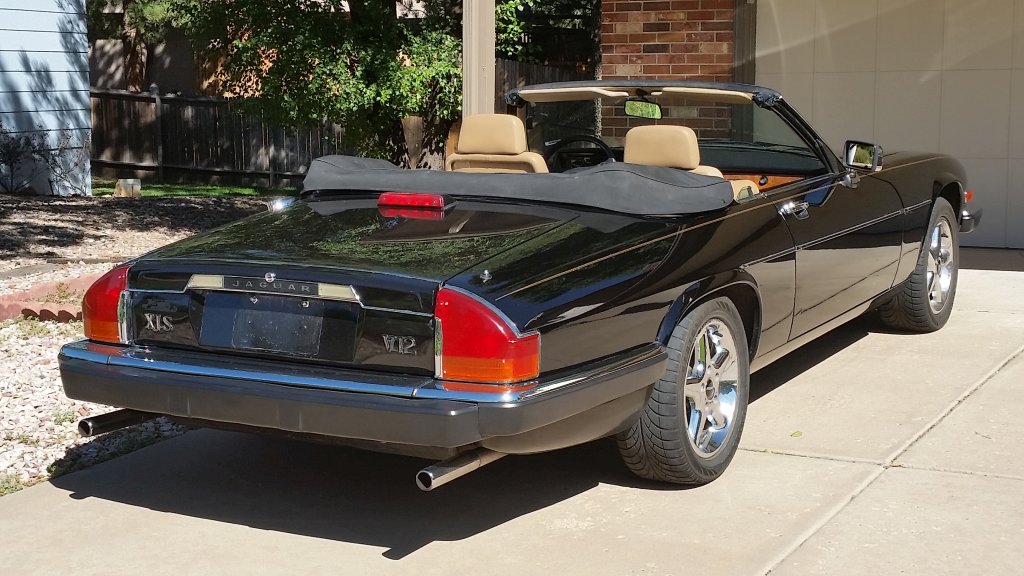 I don’t have a picture of the 900 to hand, but here’s a snap of two other best buddies. 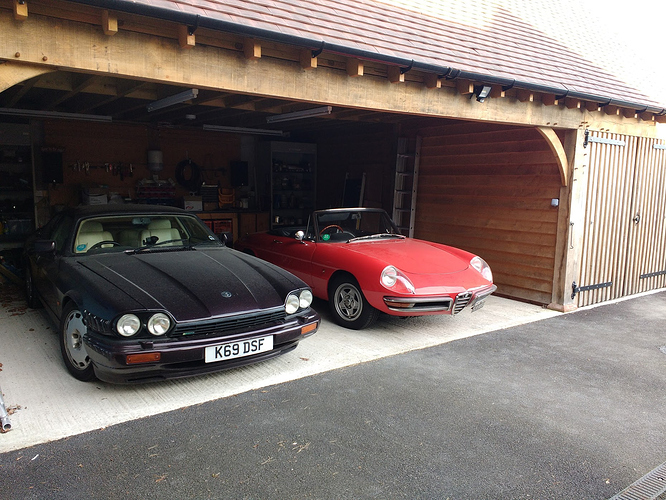 @Kirbert - it’s in your blood too. You’re just living vicariously

Beautiful! Love the black and the shiny wheels.
The straight exhaust tips are interesting… I thought all were “bent.” Were they swapped by a PO, or…?

Now that you mention it…I think they were bent on my XJ6 cars and presumably also on the XJ-S. The straight tips were installed by a PO…I’ve only owned it for 24 hours or so.

There’s a theory that the bent tips were carefully designed by Jaguar to avoid drawing exhaust fumes back into the car. I didn’t buy it, though, and installed aftermarket turndown tips on my '83. No problems.

Yes Kirby, you’ve probably helped me avoid many pitfalls while working on my car the last year. Thanks!

I often times enjoy the debates Kirby brings up with theories and ideas that others bring up. Excellent way of vetting an idea and having someone help you think it all the way through.

I appreciate you being here, even though you’ve been Jag-less longer than I have been an owner…by a sizeable margin, no less!

My SIII is “fixed”. Washed as well. Looks great, runs great. Enjoyed errands in it yesterday…

That car is a beauty. Bent or sriaight tips matter little.

I know how you feel, my RS has been away since June!!

My XJR-S is in the bodyshop at the moment - new front wings, a repaint for the front & rear bumper covers, rear spoiler, other cosmetic bits. I know that it is away in a safe place, and being fixed, but I feel tetchy every time I look at the garage and don’t see it there.