Looking at an XJ-S In Tacoma Washington

Is there anyone in the Tacoma WA area who would be willing to go and check the car out for a fee?

Thanks so much and feel free to contact me on or off line.

@chuck_goolsbee is up in that general area: maybe he can point you to a local JLer who can help.

@gregma and @Jagboy are a lot closer if they are interested.
@Doug_Dwyer lists Pacific NW (but no city) might be close.
I’m only 2 hours away but not qualified to inspect.

I’m down in Salem Oregon, about 5 hours away. I’d like to help but can’t swing it right now

Wow. An XJ220 that close gives me goose bumps.

Does the owner ever show it ?
ABFM and historic races coming up.

Where did an XJ220 come up in this discussion?

Previous posts by Doug.
He mentioned he’s a caretaker of one.

Wow. An XJ220 that close gives me goose bumps.

Does the owner ever show it ?
ABFM and historic races coming up.

I’ve taken it to 3-4 ABFMs…but none recently. People enjoy seeing it.

I’ve taken it to 3-4 ABFMs…but none recently. People enjoy seeing it.

Is this the one you take care of, @Doug_Dwyer? I spotted it at the Bellevue ABFM in 2001. 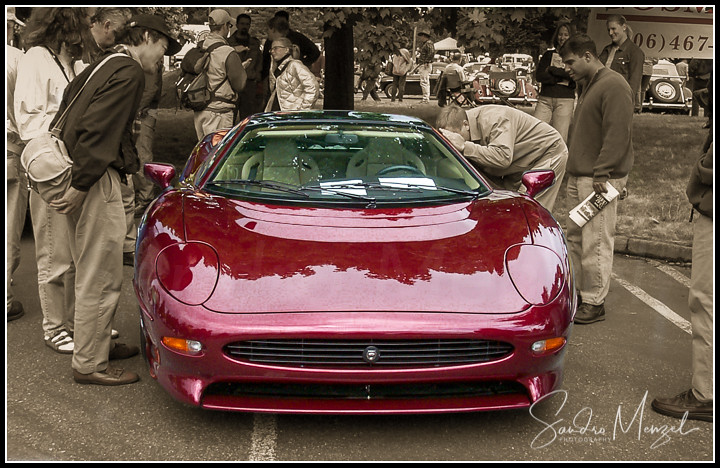 There’s also a silver one that shows up every now and then.

As is all things Jaguar …

Well we found a local jaguar mechanic who agreed to look the car over. So the broker who’s putting this deal together drives the car over to the mechanic … and …

… they couldn’t get the hood open !! One side just refused to release no matter how much they pushed and pulled. Crazy because they had it opened a few days before to send pictures.

If this is a facelift XJS, the way to deal with the hood release problem was recapped here not too long ago:

It is not as easy as you say Jim, unfortunately. These guys did a nice photo session on a problem that we may encounter in the future too: http://www.jag-lovers.org/snaps/snap_view.php3?id=1397486437 I’ve saved those pictures on my hard drive in case they disappear from the albums, like most of mine did :-((

That being the case, I believe the hood can be removed by unbolting it at the front end and sliding it forward until it disengages the latches.

Sorry Kirbert I just found out it’s actually a 1990 model. Will that make a difference ?

No, as long as it’s pre-facelift I think that method works.

Can you give me a little more information or point me to a source that may give me step by step directions on unbolting the hood from the front. Is it as simple as just removing the grill? We’re doing this long distance so any info would help.

Grooveman,
I removed and replaced the hood (bonnet) on my wife’s 1990 XJ-S convertible a couple of years ago when I restored the engine bay. From memory here is what I believe is necessary to loosen up your hood in your situation with one hood latch somehow stuck.

I have never had a stuck hood latch but if I did that is what I would try.

BTW, I have heard of hood latches getting stuck like this but only when someone has slammed the hood shut. Although a firm slam is perfectly acceptable when closing an XJ6 or XJ12 hood, the XJ-S hood should be gently lowered into place and then the latch lock/unlock handled pulled to lock the hood.

You should find out if anyone has slammed the hood shut and have the latches inspected as damage to them or the pins in the hood that they latch to them may have occurred. My guess is that someone slammed the hood and that is why it is stuck.

When I bought my 95 XJS the PO (a jag enthusiast and still owner of jags) schooled me to lower the bonnet by hand, and then gently push down by placing my hand on the bonnet just above location of latch until hearing it latch. Driver side and then pass side. Usually I use a micro fiber cloth between hand and paint.

Just a technique I have stuck with. Believe for pre-facelift the same can be used except once lowered them you have the release/lock mechanism to finish the closure.

At times, my car’s bonnet stuck shut. I used a small pry bar, cushioned by a shop towel at the trailing edge. A gentle nudge and it popped open. My car is an XJ, but the latches are similar, I think.

And decades ago, my 79 IHC Scout II did it. Same idea, forward opening. But, one latch only. similar to the Jaguar latches. Pin and pincers. Again a Bowden cable to the cabin. Flaw. Flimsy attachment of the handle to the cable. Prone to depart sans hood pop!!!

One way, with pull out, Whack the hood over the latch with the edge of a closed fist. Always worked…