New to Forum - Searching for a Unicorn

I was introduced to the XKE in 1968 when my favorite Uncle bought one as his first new car out of college. Three years later, when I was 16, he stopped by my house and asked me if I wanted to drive the Jag. I explained that I didn’t know how to drive a stick. Without missing a beat, he replied “Well today you get to learn”. Needless to say, despite stalling it on the first release of the clutch, I was bitten by the XKE bug.

Over the year, I have owned several Corvette’s, several Porsche’s, a Mercedes SLK and while they were all great cars, they didn’t hold a candle to the XKE. Now retired, I have been working on and restoring a couple of vehicles - a 1999 BMW Z3 Coupe and a 2003 Jeep Wrangler.

I am confident enough in my mechanical ability to attempt just about any mechanical work that doesn’t require a lift and with the encouragement of my wife have decided that age 65 it is now or never to finally get my XKE.

Believe it or not, my Uncle still has his Jag, but it hasn’t run in nearly 20 years and he is still reluctant to give it up by selling it to me, but who can blame him. As a result, I have begun my search for my Unicorn. I’m searching for a 1968-1969 XKE Coupe, with manual transmission, factory air, and wire wheels. I’ve already passed on a 2+2 (no offense to 2+2 owners, just not for me) and passed on the automatic transmission (just not a Jag in my eye, sorry auto owners) and I’ve passed on some body work nightmares.

Other than introducing myself, my first of many questions to the group is, if I find a 68-69 Coupe, but it doesn’t have factory air, how difficult is it to install an aftermarket air con system, like from ClassicAutoAir?

Thanks in advance and wish me luck in my Unicorn hunting.
Bob

if I find a 68-69 Coupe, but it doesn’t have factory air, how difficult is it to install an aftermarket air con system, like from ClassicAutoAir?

There are a few here who’ve done it: it’s not an inconsequential job, but it does take a lot of fiddlely work.Your best bet is to buy one already restored: you’ll save yourself time and grief. they come up fairly often on Bring A Trailer (bringatrailer.com).

Welcome to the best Jag resource on the Net, and good luck in your search!

That depends on you.

It’s way easier than rebuilding an engine but way harder than changing the oil.

You’ll need to remove all the belts and pulleys. and cut large holes in the firewall, with poor directions.

But hey I did it, with lots of help from this list.

I would not predicate my search on original factory AC, for two reasons, I just don’t think there were that many until maybe S3 so you’ll wait years to find one. Second, they’re 50 years old old and broken down. You’d end up likely having to do major restoration on it to get it to work, then there’s whole converting to R134 business.

If you can turn a wrench, and you’d better be able to or an E-type will eat you for lunch, then installing a kit can be accomplished. You won’t add it’s cost to the car’s value but you won’t destroy value either unless you buy a concours trailer queen.

Bob, I sent you a private message. Click on your icon in the upper right corner to read.

Fairly easy to do, works very well and there are several options of where to fit: http://claytonclassics.co.uk/parts-upgrades/204-air-conditioning-jaguar-e-type 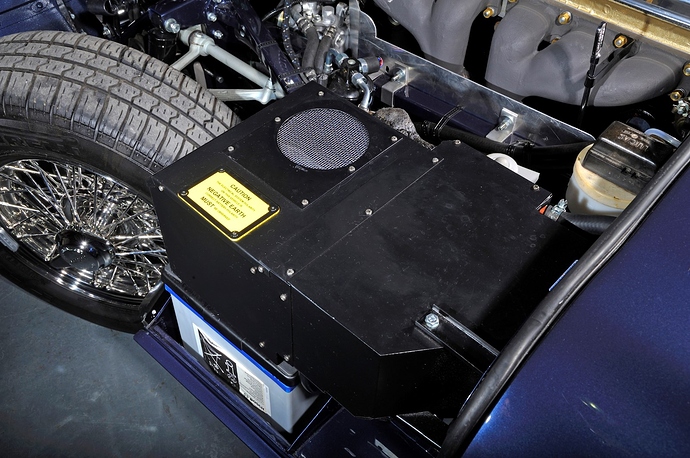 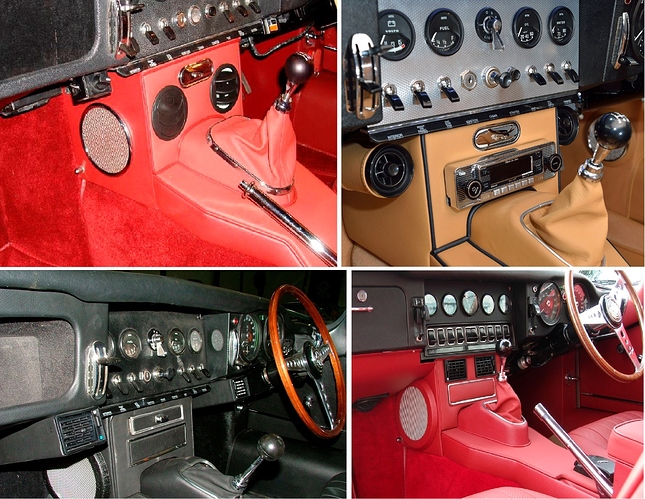 Bob, I have a '71 OTS series II that originally came with AC but was removed by the previous owner. It still had the correct back facing alternator required to run the compressor. I was able to find and restore an original factory version interior cockpit fascia and coupled it with the Retro Air components. I am very pleased with the result. My mechanic said it was “fiddly” but not that difficult.

That looks to be the most straight-forward looking set up: any idea of the cost?

Your best bet is to buy one already restored:

-Steve (proud owner of an E)

You’ve mentioned that one before I think David. Have you or other people on your side installed one? Do they supply the fixings to relocate the battery?

Along with the Drake Equation, and other famous formulae…We now have…

In terms of wrenching ability, while not done on a Jag, I have replaced entire suspensions systems on Jeeps, re-wired badly cracked wiring harnesses, and recently on the 1999 BMW Z3, I removed the intake manifold to replace the CCV and all cooling system pipes, hoses, belts, water pump, etc. I was a bit like working on the third level down of a Swiss watch.

While driving the car is the ultimate goal, I’m not looking for a car ready to drive on day one. It would be great if the engine started and the brakes barely worked, but otherwise I am looking for a mostly mechanical project to keep me out of trouble.

but otherwise I am looking for a mostly mechanical project to keep me out of trouble.

If I can interpret that as countless hours tinkering and repair/restoring, then HECK yeah buy an E-type!!! (or come finish mine!)

, I have replaced entire suspensions systems on Jeeps, re-wired badly cracked wiring harnesses, and recently on the 1999 BMW Z3, I removed the intake manifold to replace the CCV and all cooling system pipes, hoses, belts, water pump,

There’s nothing terribly mystifying about an E Type: mechanically, its pretty straight forward.

There are fiddlely areas that need specialized knowledge, but ALL of that knowledge is here, in the minds of many JLers.

Use the search function, and with some digging, you are just about guaranteed to find your answer.

Do they supply the fixings to relocate the battery?

It looks to me like the battery is still there. The blue and white box.

Angus Moss has installed several of these including one in his own FHC. Details here: https://www.mossjaguar.com/air-conditioning.html

Both he and his customers are delighted with the installation.

Many of us have fitted the Clayton fresh air vent upgrade. 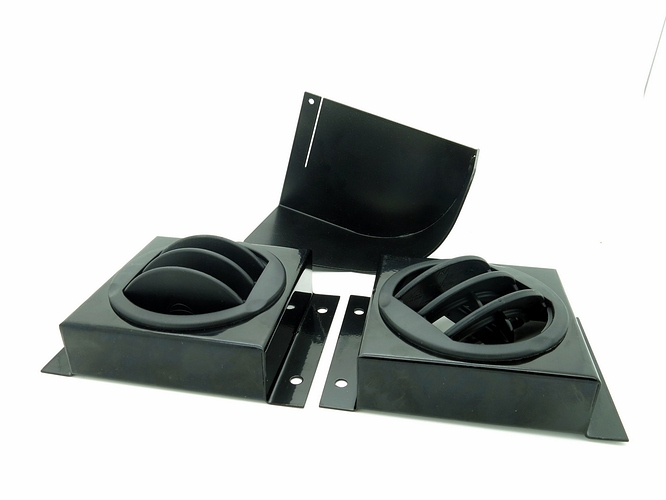 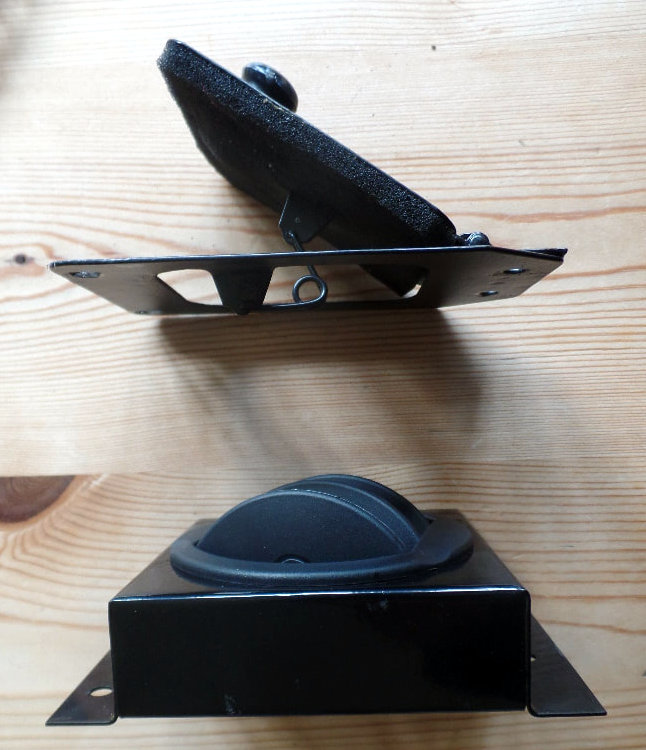 The adjustable vents are a direct replacement for the flip open doors in the footwell and allow you to turn off the air and adjust the amount/direction of flow by setting the outlet blades, much like a modern car. They also supply a curved venturi which push fits inside the bulkhead channel entrance of the heater unit. Normally air passes through the heater matrix and hits a vertical wall causing back pressure and turbulence thus reducing flow. The curved venturi allows the air to more smoothly negotiate the curve increasing flow. Simple but very effective. The combination of venturi and directional outlets makes a huge difference to cabin comfort and with an upgraded fan motor (e.g. Fiero fan) the amount of air you can get flowing through the cabin is quite incredible. Fitting is very simple as the vents are a direct replacement for the stock doors. To fit the venturi you do need to partially drain the cooling system, remove the heater box and slip the new part inside. The parts are available separately if you don’t want to bother with the last step. Highly recommended although none of the parts are advertised on the Clayton web site for some reason. Email them for prices/availability. http://claytonclassics.co.uk/

Do they supply the fixings to relocate the battery?

It looks to me like the battery is still there. The blue and white box.

I’ll bite…how does one remove the battery? Does the whole new heater box have to come off?

I don’t know how else you could. Hopefully there’s enough slack in the hoses to raise up enough. They have a bigger version that forces you to relocate the battery to the other side but apparently it’s for RHD cars only.

No, the unit is the same depth as the stock one and fan so same procedure for removing battery - tilt. They offer a recirculation option (RHD only) which does mean moving the battery to where the air silencer sits and then using an ITG filter on the carbs

Any clue on the cost?