**
Which fuse, Col - still #13? Which is supposed to be interior lights etc for RHD, both before and after 83 - and AC relays and clutch on LHD. And rated at 15A for them all. The anti run-on fuse is #15 and only for LHDs before 83; after that the anti run-on was not fitted - it was carb specific.

Resistance measurements are only valid with wires disconnected. Any electric circuit is connected to ground one way or another - measured at either fuse terminal (fuse removed) you read some resistance, meaningless unless the other wire ends are clinically disconnected from ground…

Simplified; if a light bulb is connected to the fuse terminal, your read the resistance in that bulb - if a switch is in series with that bulb and the switch is ‘off’, and or the bulb is removed, you read infinite. With several users in parallel the same applies, but is more complicated to isolate all from ground. If the other fuse terminal, power ‘in’, is powered from the ign key - the key, even when ‘off’ is grounded…

Right hand drive fuel injected. 1983 build fuse block under dashboard. Everything I could disconnect has been disconnected. Bulbs and holders removed. Door switches removed. But connected the interior lights are all working as they should. Just a short on the purple wire from the left hand fuse marked 1. Permanent power but radio is powered only when ignition is on or accessories.
Fuse blows instantly it is put in. Test tone connected to the top of said fuse reading of 4 odd ohms I removed any thing I could find and the tone never wavers. Moving wires and relay type canisters makes no difference .
I’m stumped but I am not putting another screw back in until the auto electrician se it.
Can not see the theory to running positive and earth to every door switch and light. Most pommy cars I have worked on have a positive to the light and is switched by earthing in the pin door switches.

My jaguar puddles worked that way. Note, The wires at the door switches are black. Black denotes ground here as well
Clue, That black circuit is grounded elsewhere. Some where between the lamp/s and a switch, one or more of the four.

What follows is a stretch, but what the heck.

Here’s why I ask…

On some build configurations a blown antenna fuse will cause a problem with the puddle light circuit. I won’t go into the weeds with all the gory details as I’m not at all sure this relates to your problem. A Jaguar TSB addressed the issue; the fix was adding a diode to the interior light circuit.

**
Is there an inline fuse behind the radio, Col?

Nominally, the radio fuse is in-line, 2A. The antenna drive is, according to the fuse chart, separately powered through #13 fuse - which should be 15A To elaborate; the radio should have a an ‘ant out’ connection that, with radio ‘on’, operates a relay(!) to ant ‘up’ position. The relay must have permanent(!) antenna ‘drive’ power, in your case from #13 fuse - which should have power irrespective of ign key position. Ie; it is not(!) the radio that powers the antenna - just triggers the relay. When the radio is turned ‘off’, ‘ant out’ is unpowered and the relay reverts to the ant ‘down’ position…

Anything that contradicts this…?

Unfortunately; the your aux fuse chart listing does not coincide with any of my fuse charts - which is highly confusing. Is the ‘radio’ and ‘aerial’ and ‘cigar lighter’ specifically mentioned on the fuse box? On ‘some’ later models they were all fused by inline fuses; ‘radio’ behind the radio, ‘aerial’ in the boot and ‘cigar’ behind the right hand cheek panel.

The most confusing is that a 4 ohm resistance will not blow a 10A fuse - somehow we seem to be barking up a wrong tree on this. Questions; you mention ‘left hand fuse marked 1’ - what do you mean? Purples are indeed associated with door locks and delay relay - but is not related, in my diagrams, with #1 fuse? You say ‘fuse blows instantly it is put in’ which fuse - and in what configuration, what is connected, when the fuse blows…? And, incidentally, Jaguar is a pommy car; puddles etc are indeed positive powered, and are grounded by the pin door switches…

Have you verified that the radio actually works when separately powered?

Yes there is a seperate inline fuse to the radio, my mistake fuse 1 should be fuse 13 nothing contradictory to your statement. Fuse 13 ….not sure now… blows as soon as it is inserted. …. I’ll donate another fuse to Lucas god tomorrow….I’m thinking the ignition was “ on” as you said 4 ohms won’t be seen as a short just load. Maybe the antenna relay or circuit is the short. I was working correctly. Although I did notice the aerial was 1/2” up when this started but is now right down. Just to make things clearer the right hand fuse box has #1 10a antirun on valve#215a hazard warning#350a air conditioning.or heater motors via relays #4 15a panel,reverse lamps,low coolant sensor & warning light #535a heated backlight #6 15a air con rely & clutch #7 wipers #8 15a panel / cigar & glovebox illum.#9. 10a fog rear guard #10 DI flashers #11 35a horn relay windings, auto trans kick down solenoid, aux rad fan relay WDG, screen washers,stop lamps #12 2a speed control.
I wish we could post photos.
Col

Does the radio have a power feed which raises and lowers the antenna?

Some early cars had a manually operated antenna switch on the console. I think this disappeared by 1981 or so.

As fuse 13 is the fuse that is blowing and it powers the radio the antenna is not working now.

I’d unplug the antenna relay just to see if anything changes. It’ll only take a couple minutes. Take notes where the wires go on the relay as they’re individually attached.

We can post photos. Look above the reply page. count 8 from the left. Anarrow pointing up. Abar unnder it. Symbol for upload!!!

Unrelated. but here is one. 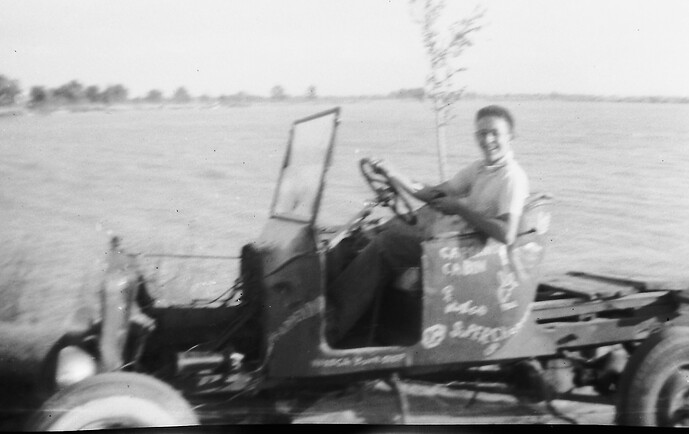 So today I put a new fuse in #13 ignition off nothing happens ignition on nothing this was with the purple wire removed from antenna relay. Put the wire back on the relay and antenna did it’s thing trying to lower the antenna which of course was already down. I think I am going to leave it as is ie all lights (9) of them bulbs removed, radio removed, all covers removed and park it until I can get it to the auto electrician next week. After my second stroke I am so fatigued am unable to use my right arm/ hand that just getting to the relay has taken me an hour. Plus I don’t think I am able to think analytically any more. I really appreciate all the help but things are just going around in my head and I am getting nowhere. I’ll get back with the results after the car sees the auto doctor.
Col

Some early cars had a manually operated antenna switch on the console. I think this disappeared by 1981 or so.

Disconnecting the antenna relay seems a good idea for testing - though a stuck motor should not really blow the 10A fuse?

I think I am going to leave it as is ie all lights (9) of them bulbs removed, radio removed, all covers removed and park it until I can get it to the auto electrician next week.

**
I ‘think’ the auto electrician would prefer the system in ‘original’ state, Col - though in the black art of car electrics; its wizards’ minds are difficult to read. The radio should be connected, but removing covers is fair enough…

Sorry to hear about your strokes - it sure complicates any DIY. You have done well, but car electrics sometimes defeats even the smartest of us!

To an auto electrician it seems to be simple; long time ago, I spent two days on my Gordini searching for an electric fault that interfered with parking and direction indicators. I literally tore out all relevant wires connections, with no progress. Drove down to the electrician; he looked briefly at the symptoms, got a screwdriver and changed the double filament front left bulb. An internal short in the bulb - it’s so simple when you know your profession. He didn’t even charge me…

As an aside; ohming powered circuits won’t work - that requires a test lamp…

Collishaw aKA Sparx, whre are you???

But, the word that the antennae motor keeps on trying to lower the already down mast is curious.

decades ago, I had a strile that disabled my right arm. Weird beyond belief. I got to the hospital. Arm returned to function on the way! I drove myslef. left arm worked! A few tests were normal. Trns ischemic or something like that. A neuro put me on amed for a time. mnmotored and no return. removed the med. No efffects and not again.

Photo. Me and MY T in an intermediate state.

It seems to me that the antenna was returning to it’s natural state, ie down , as the radio was in the box in the boot therefore not sending a signal to go up or down.
Glad to hear you had no lasting effects from your episode, I wish I could say the same!

Back again can’t help myself, I had all lights working, all nine of them, working with switches and doors. Plugged the radio in and blew the fuse #13. When that fuse blows I lost rear puddle lights and map reading light, the one in the middle of the dashboard roll. Replaced the fuse 10 amp, and new radio next week. Of course all the “spare” radios are different plugs. Supplied and fitted by trusted installer.
Let you know what happens.

Plugged the radio in and blew the fuse #13

**
Do you mean connecting the in-line fused wire to the radio, Col - or what? Was the radio ‘ant out’, and loudspeaker wires connected - and was the antenna up or down at the time? The point is that the radio ‘on’ operates the relay to antenna ‘up’ - and power is applied to the motor. That #13 fuse then blows means a short, or overload, at the relay or the motor.

Ie, the inline fuse powers the radio and should blow if the radio itself is shorting. What exactly #13 fuse actually protects is not exactly clear, but since it blows when the radio is plugged in, and the inline radio fuse holds; it is ‘reasonable’ to assume that the problem is in the antenna power lines?

It is perfectly possible that #13 protects the rear puddles and the map light - and the other lights are protected by a different fuse. However, since #13 holds before the radio is plugged in - the lights are not the cause of the #13 blowing…

I believed the inline fuse under the ski ramp was the permanent power for the memory. As the radio has been replaced at some stage it has a multiple pine plug with no markings. A bit of detective work I should be able to find the antenna out wire and disconnect it, and see if the fuse blows, thus proving the radio or antenna circuit. Tomorrow is another day….