After a little help please before I call my mechanic.

My starter is not turning over (1966 Series 1 4.2 FHC). Battery is good and their is a distinct click coming from the engine bay but nothing else. Is there anything I need to check before looking at replacing the starter?

I suppose my first question would be - what makes you think the battery is good?

Almost any auto parts store can load test your battery as it sits in the car.

Only a load test is valid here - the mere fact that the battery voltage is good or that it lights up the headlamps is no indication of whether it is strong enough to crank the engine.

Tom,
If it jump starts its not likely the starter, your just adding another
battery right? I would remove the battery cables and clean those
terminals, a bad battery connection can give you those symptoms. Another
clue, turn on the headlights, what happens when you hit the starter? If
they go out its the battery terminals, if they don’t then you do have
another issue but would start by cleaning terminals.
pauls

Just had the same problem. My expensive battery charger/tester showed battery A-OK, However after doing a load test…it was a bad battery. Good Luck !

I agree, the first thing to check is your battery. The clicking of the starter solenoid without cranking the engine tells you you’re not getting enough juice to the starter. If it’s OK, check the terminals at the battery post; make sure that they’re clean and corrosion-free. Then check for the ground strap to the body. Finally, it sure wouldn’t hurt to run another battery cable (get it at your FLAPS) from the negative post on the battery to a solid connection on the engine block. You can’t have too much ground.

My E-Type suffered a similar problem some years ago.

You may find that if you give the top of the solenoid a sharp tap with a heavy spanner or something similar it will shock the contacts into working. That just proves it’s the problem I’ve described.

Solution is to replace the starter motor and its integral solenoid.

If your battery is good, it’s likely to be worn contacts in the solenoid that sits on top of the starter motor.

Could be, but his statement that it “Jumps starts fine” seems to suggest that the system is basically sound.

but his statement that it “Jumps starts fine” seems to suggest that the system is basically sound.

I’m with you Geo. If it jump starts fine, I’m not sure why anyone is talking about anything except the battery, or the charging system causing the battery state to be bad. Without knowing exactly how the jump start was done, there could be a problem with some other part of the system I suppose. For example, if the jump wasn’t done to the battery terminals directly, but with the ground jump connection to the car body, the issue could be a poor ground connection to the battery. Likewise if the hot jump wire went directly to the starter motor bypassing the solenoid. More details would help…

The headlight trick will give you a quick and easy clue. Turn them on, hit the starter, if the lights go out its a battery cable/connection problem if not then the solenoid or cable to it is more suspect.
pauls

The starter in my lump and the one in my Jeep are somewhat similar to the Jaguar unit in my shed.

Either or both can mean a no crank situation.

The isolation method of diagnosis.

Your probably due for a new starter solonoid, so its best to replace the whole
starter.
Walter

Your probably due for a new starter solonoid, so its best to replace the wholestarter.

But when he jumps the car it starts fine. That kind of means the starter and solenoid are OK.

Changed out the starter (a rebuilt one that I had purchased and installed when I was doing the clutch…this was a real PITA. Luckily I had not re-installed the interior after the clutch replacement yet. Same result…supposedly a good load tested battery and “promised” to be good…did not crank the engine!!

Thank you gents. The In battery light said it was ok, my battery conditioner said it was good, auto shop tested the battery and said the battery was good. As a final check I thought I would pull out my XJ battery at try that in the E Type . E Type started straight up. So simple battery problem

Looks like I’ll make it to cars and coffee tomorrow morning!

Thanks for the replies.

I learned a long time ago, start at the beginning and work through, that way you will always find the problem and also have a better understanding of how a system works.
If you jump in looking for the most difficult then it becomes costly and you are forever chasing your backside.

Glad you’re back up and running again.

Its all good!!!
pauls

…start at the beginning and work through…

But you are correct, a methodical approach may seem slow and tedious but it is almost always the quickest route to a solution.

Glad the problem could be resolved with something as simple as a battery. 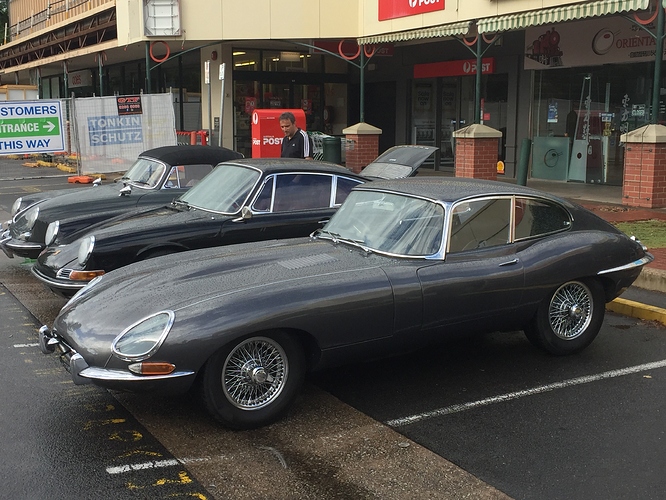 Luckily i’d made friends with the early 911/912 and 356 guys so I was able to get a push start. Of course all the kids were there with their cameras to get the pictures of the Porsche guys (in their Porsche hats and jackets ) pushing the Jag! I’m sure they are all over Facebook by now.

So I retrieve the original E-Type battery which I though was dead and put it into the XJ6. She starts straight up and I do a lap around the block.

Get back home put and pull the E-Type Battery out of the XJ6 and but it back in the E-Type. E-Type starts straight back up first time.

What am I missing here? What is my E-Type doing to the batteries which then stops them turning over the E-Type Starter, but doesn’t effect them being used in the XJ6

What’s my XJ6 do to the battery which them ‘fixes’ them to be used to start the E-Type?