Steering column removal. so close yet so far

Shop manual has me as step 1 remove the radiator.

Les: This is part of an old post I put together on steering column work. It describes removal and disassembly of the later colapable column, but it shouldn’t be too differnt for the early columns: Steering column removal. 1.Disconnect the battery. Remove the center ornament from the wheel 2.Remove the locknut and the nut from the column. 3.Pull the wheel forward to remove. As you do so, the two halves of the “split cone” will fall away. Be sure to retrieve these. Tip: a d…

7.Unscrew and remove the metal clamp which retains the turn signal
switch. There
are two screws on this clamp, and they use some oddly shaped washers to
grip the ring. Do not lose these.
8.Unscrew the ‘plug’ which keeps the upper column from sliding out
of the center
column. This plug should be hand tight, so no tools. Do not lose this plug.
Slide out the upper shaft and the shaft retainer.

Mine doesn’t look like this. It has pretty obvious screws too and bottom securing a clamping bracket that holds the switch to the side of the column. Are they on the other side which we can’t see in this photo?

Other side view. The Entire turn signal assembly is held in place by a ring which fully encloses the steering column shaft so can not be moreved… 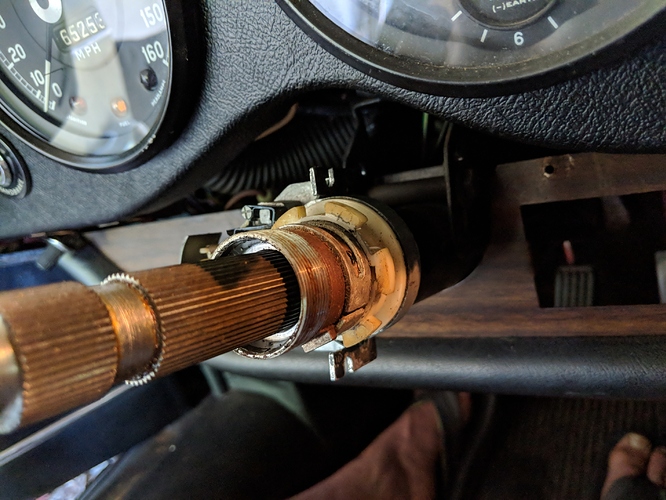 Oy, I wonder if it slips on fully assembled over the lower end of the inner column? Mine isn’t like this. The entire switch is on the left hand side, and it’d clamped to the column with a bracket. It might be a later replacement style switch. It has the large nylon fork turn cancelling mechanism.

Mine looks the same. I copied and used your pic as an example. The 2 screws at A = The forward 1 holds the plastic surrounding cover on and the rearward holds the turn mechanism to the column. Obviously, there are 2 at the bottom also! When removed, mine simply pulls free from the shaft??

The ones at B = 2 set crews that hold that bracket to the main shaft. When removed, that bracket pulls off the shaft, to the front. 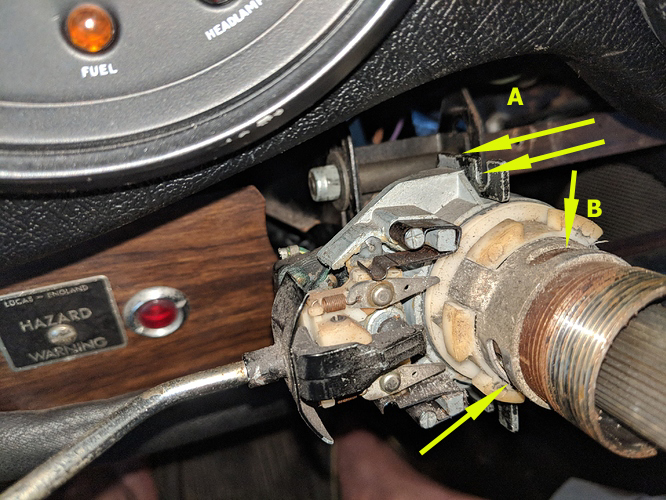 Bill,
That odd-looking flat piece on the underside of the column (at about 5:00) is a plug that unscrews. Once removed, the retaining ring can slide forward, and then the whole signal assembly can slide forward for removal. I just did this on mine today and got stuck at this point for awhile…
Tim
Baltimore
'67 OTS

I’ll check in when I’m home but unlike the directions I read online the turn signal assembly consists of a solid collar that emcircles the steering wheel column so can not be removed without taking out the entire column. Which kind of wrecks my nice Sunday afternoon

Mark Tim et al - that makes sense and thank you.

Can the collar can be slid off the column “over” the small plug screw?

Bill,
If you proceed a few steps by first releasing the cross-bolt that holds the column up to the dash, drop the column downward, then loosen (or remove) the other cross-bolt at the lower end that captivates the shaft to the connector, you’ll now have enough end play in the shaft to re-locate the problematic retaining ring and clear that plug screw. I’m pretty sure that plug’s gotta’ come out. I know, who designed this thing?!
Tim

That is a good theory but in my case the column goes through an after market trim panel that used to hold the ac. I’ll see if I can free up the other end.

If your '67 column is the same as my '69, then you may find some help in the Turn Signal Switch Mechanism section of my web site https://sites.google.com/site/1969etypephotos/. As I recall the “Control Striker” partly covered the “Stop Button” on my shaft initially, but I was able to move it down the column enough to free up the Stop Button and thereby remove it.

Thanks all. By gently levering the collar it was possible to turn the stop screw enough to remove it. So far so good…

Hello All, I have a 64 XKE Roadster with horn trouble. Seems to go off every time I turn the wheel. Reading these posts sounds like I need to clean up the parts inside the shaft. In trying to remove the shaft everything went well until trying to find the button, plug or screw to release the stop preventing removal of the shaft. I must be blind, but all I see are holes with nothing in them except for the top & bottom holes with a wire. From the pictures below can someone tell me what I am looking for?
Thanks
Bob
'64 XKE OTS 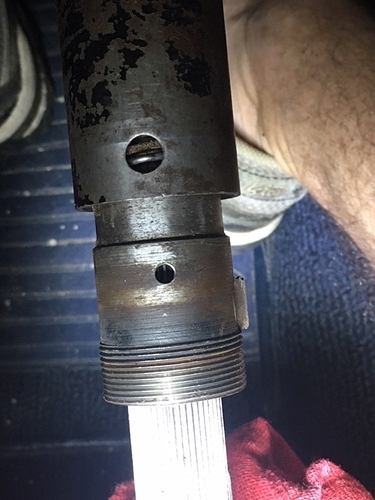 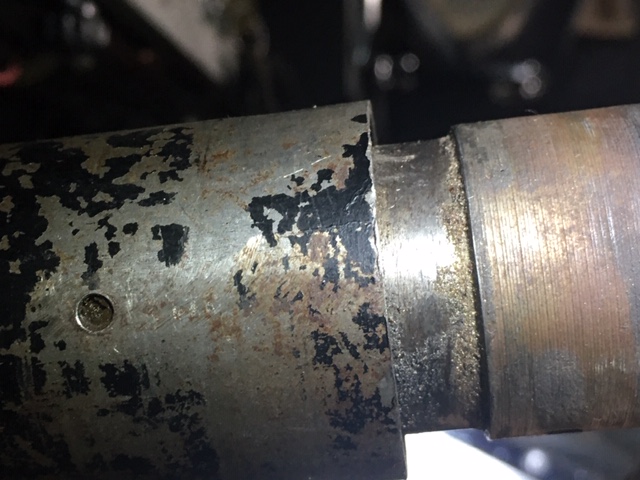 First question, was the wire (purple I think?) attached properly to the copper contact? It’s a hoop of copper and the bare wire end attaches to it using a copper push-in cone. I ask because when I got my car, the horn would go of when I turned the wheel because the DPO had omitted the locking cone and the wire was flopping around and contacting the column. That was the first of about 1000 things I had to fix.

It looks like the column is still in the car? Mine hasn’t needed to come out in years but I’m pretty sure the whole thing needs to come out to take it apart. That just means removing the two side pivot bolts, and pinch bolt, and the pinch bolt on the u-joint. The inner column slips out the top so maybe the outer column can stay attached to the car and just disconnect the u-joint. I’ve never had a reason to do it that way though.

It has been a while but I think you can unscrew the small flathead set screw shown in the photo and then you can slide the column. Have you tried this?

well my horn going off when turning the wheel problem was resolved after disassembly of steering column & cleaning. now the horn goes off whenever I turn the key on. such fun. I am disassembling again to see what I missed. looking down the #2 shaft I see a blue wire. instead of a push rod my series 1 has a stiff wire that that makes contact to the horn button on the wheel. I am thinking maybe the wire in the shaft broke of from the push wire. should I pull the wire out & replace with the rod (parts book calls it a contact pin assy). any ideas or suggestions? 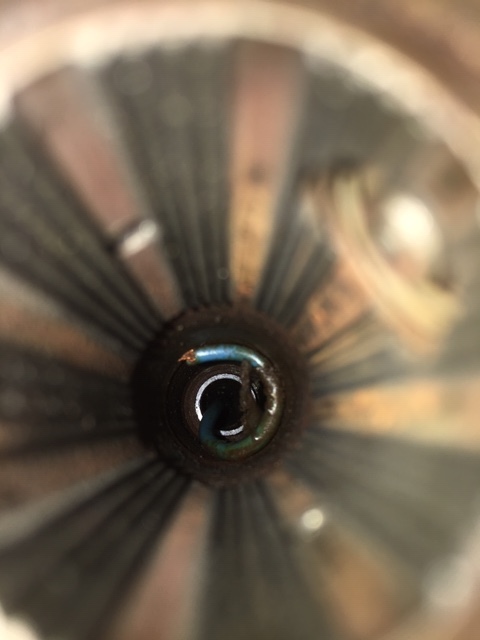 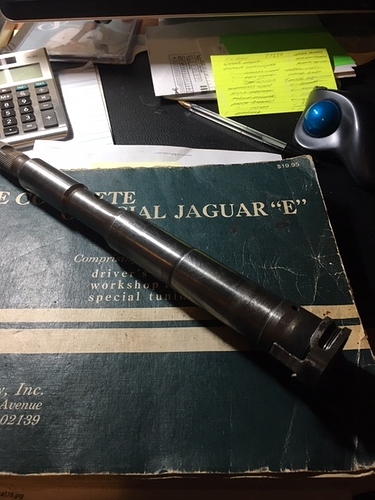 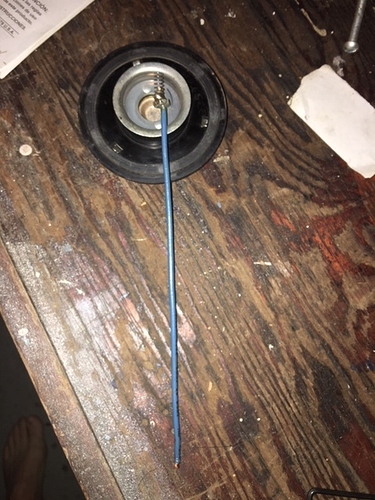 Pretty interesting retrofit… Mine had a solid brass rod that when pressed completed the circuit.

That’s pretty funny. I’ve seen a lot of bodges over the last 20 years but this might win a prize. Did you not notice that the first time you removed it? That whole mess is wrong. There’s supposed to be a brass rod, an insulating spacer, and spring up top. Maybe a plain washer also, can’t recall.

It looks like your inner column may either be wrong or just missing a part. There’s supposed to be a circular copper contactor on the end, before the splines. XKs has the rod kit, and outer column brush, but I don’t see the circular contactor that brush glides on. It might be cheaper to stick an air horn on the dash at this point

Look at this diagram and you’ll see a whole stack of little parts down by the slip ring. There is also a copper contact on the outer column and I think some kind of rubber block that holds it in place. Just going off memory. I haven’t looked at it in years

I noticed the stiff wire in place of the rod & thought it was a little strange to have a wire with 1/2" bare wire on the end. Did not see the other part of the wire in the shaft until I removed everything this time & just for grins tried to look in the shaft. Surprise Surprise. These cars never make it easy. Looks like a horn contact kit for me. If that doesn’t work maybe I’ll hook up a bicycle bell.

Thank you for your help

without the inner shaft installed & no push rod horn goes off when key is turned on. have disassembled lower shaft replaced spring. the copper contacts were slightly bent so thinking I have them contacting in the wrong places. do they both contact the shaft thru the holes in the outer tube assy? or does one just contact the outer tube? a picture of how they contact would be great. I am getting a headache from the horn blasting every time the key turns probaly should move car out of small garage or get ear plugs.