And so it begins. Restoration of 1975 XJC

Hmm, those look like a casting. There was a version which was sort of a frame, and the words were on a metal sticker. Haven’t see the full casting version before.

I thnk a lot of that is misinformation.

Jaguar Cars Ltd did not need to consult Daimler AG, they (Jaguar) had registered the Daimler brand for USA but as no-one in the USA knew what a Daimler is, they did not sell well.

AFAIK no XJ bodied Daimlers were sold through Jaguar Cars Inc USA, but only a few DS420’s.

Ps. I can search for the documents later.

I too heard or read the same Jochen said but can’t back it up with evidence.

Yes, but in America a company can own the rights for a name like ”Prosciotto”, ”Parmesan” or ”Budweiser” and they do not need to be the originators of it. Like I wrote I can later post the documents, i have a few meetings tomorrow.

But in the meanwhile you all, and especially Max can enjoy a video about how these cars were originally made in the mid-eighties!

Some really nice footage in there, also about the floor pan coverings and underbody as well. 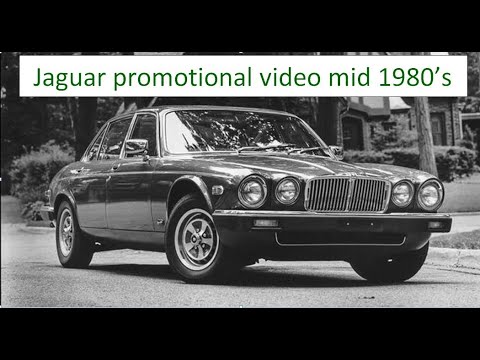 I am now getting ready to remove the rear glass pane. Any words of wisdom before I do something I will regret?

Yes, be very careful with it and always put it down on blankets. Do not bend the spades for the heating unnecessarily and always remind yourself that it’s a much better design than the S3 received.

Off topic, but just to clear up any confusion here, regarding Jaguar’s use of the Daimler brand name:

In 1950, Jaguar agreed to lease from the Ministry of Supply the Daimler Shadow 2 factory in Allesley, Coventry, which at the time was being used by The Daimler Company Limited and moved it to the new site at Foleshill over the next 12 months. Jaguar purchased Daimler – not to be confused with Daimler-Benz or Daimler A G in 1960 from BSA (Birmingham Small Arms Company). From the late 1960s, Jaguar used the Daimler marque as a brand name for their most luxurious saloons.

Yes, but would what is now Mercedes-Benz Group AG have been in conflict with Daimler of Jaguar in certain markets?

I will cut and replace with a new one. 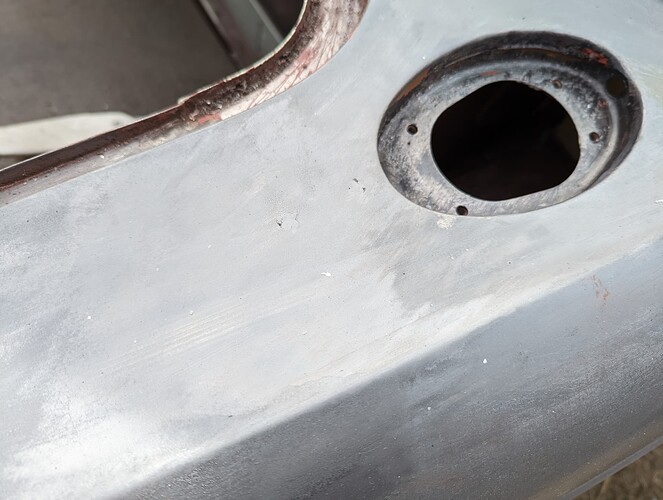 Today is the day. Rear glass coming off.
It was a lot easier than I anticipated.
There was no rubber insert in glass seal channel, the rubber seal was easy to cut and remove from the glass, the glass lifted easily, was light and easy to move around.
The hardest part of the operation was removing the inside trim to disconnect the heater wires.
No rust at all in the “corners”, but some under the shelf on the left side. Strange spot. I cut it out and will weld a repair patch. 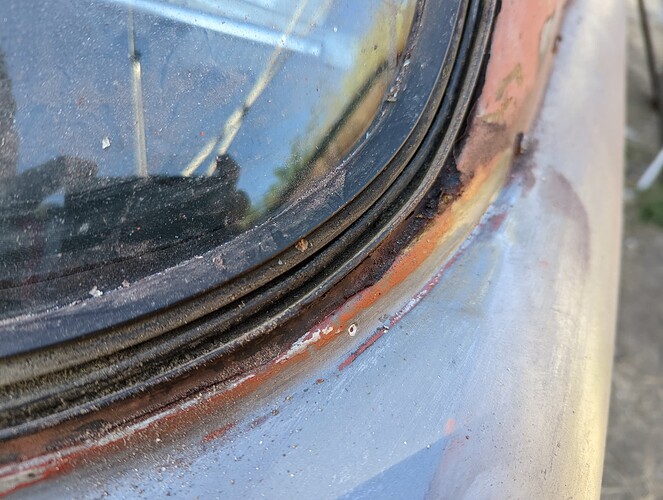 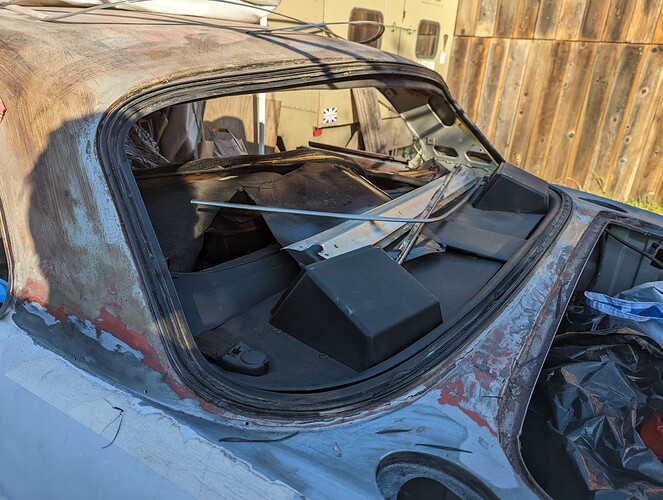 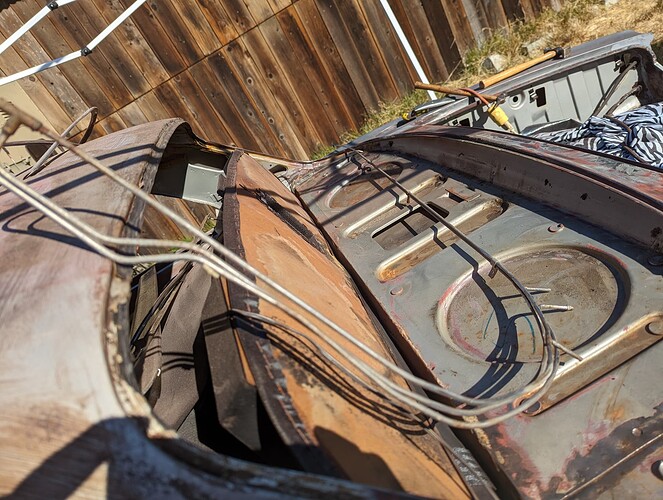 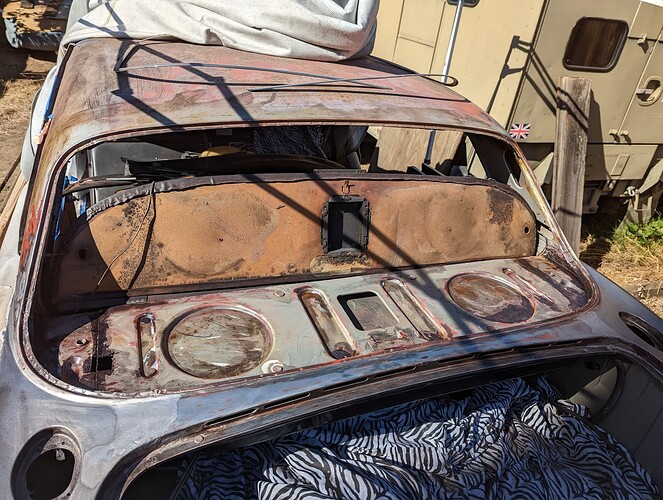 That is a very strange spot, looks like the aperture is in good condition.

I salvaged these little buggers. If you know, you know

On my first XJC, these were blocked… Oh the hours spent, finding out why the engine would cut off, and then extracting them to clean them… 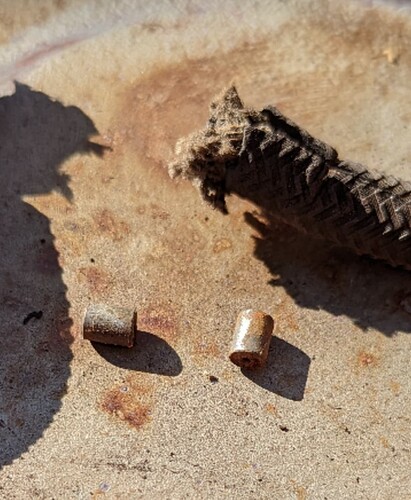 Interesting…I just pulled my rear windscreen last weekend and had a 1/4 inch rust hole in the exact same spot.

Also removed the front windscreen, all well there.

I’m putting some POR15 over the repaired area and around the front and rear windscreen “gutters”.

Interesting…I just pulled my rear windscreen last weekend and had a 1/4 inch rust hole in the exact same spot.

[quote=“jahmiata, post:236, topic:366971, full:true”]
I’m putting some POR15 over the repaired area and around the front and rear windscreen “gutters”.
[unquote]

As the screens adds to the body stiffness it also takes some loads, flexing - and we have seen some very ugly results, front and rear… 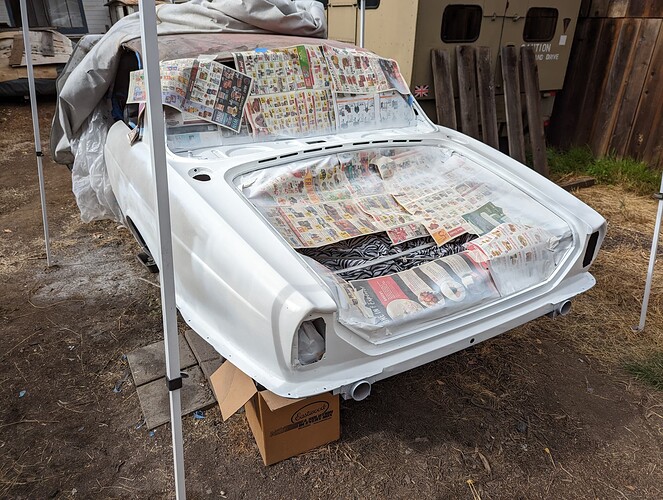 Made a big mess, many runs. Something wrong with my spray gun settings. Will rectify before primer.

Next, the second door, the roof and windshield surround, and done!