Some folks here may recall the various threads I have started here regarding my struggles with the climate control system on my MY94 XJ6.
In the last thread I had reported that changing the DBC10009 relay I had good reliable climate control operation.
However even though I have reliable climate control of the fans in the car, I still have no detectable heat flowing into the car.
I have checked over the past week or two the inlet and outlet hoses for the heater core.
I thought I could detect by feeling the hoses that the inlet hose was much warmer than the outlet hose leading me to believe that the heater core could be clogged up.
So yesterday I partially drained the cooling system and after much struggling I was able to remove the inlet and outlet hoses from the core connections on the firewall.
I then used a hose from my house water supply to inject water under pressure into the outlet of the heater core.
When I did this I had a kink in the garden hose I was using to do this with and when I leaned over to straighten out the kink I missed the actual first flow results through the heater core.
However I did hear a sort of “plop” and then when I turned to look at the water flow through the heater core in the reverse direction, it looked really good with a strong flow of water passing through the heater core and flowing out of the normal inlet connection on the heater core.
So thinking I had a positive result here, I put the hoses back on the heater core connections, filled up the cooling system again, and pilled the dog into the car so we could go for a ride to enjoy the fine heating system in the car.

Unfortunately after driving around for some time with the heater controls set for heat and the fans on medium I STILL HAD NO HEAT! ARGH!
What I do have is a constant flow of strong COLD air flow up at the windshield even though I do NOT have the system set on defrost and this air flow blowing out of the windshield vents is definitely not warm at all even after driving around for a half hour or more.

Any and all suggestions would be most welcome at this point.

Hi Steve!
Your '94 car has a heather valve at the left rear corner of the cylinder head. Maybe it’s stuck closed no letting warm water into the heather core.
There are two vacuum operated flaps under the center part of the dash between the tweeters that open when you select defrost. Most likely they broke at their pivot point and stay open constantly. That happened to mine. They’re plastic.

But the in-and outlets are hot. It makes sense that the machinery that distributes the air is broken. Most likely the motor that directs the air through the heater core or the switchgear.
**vacuum then, not motors.

The bend flaps at the heather core and a/c evaporator are operated by electric actuator motors. They’re located on the right side of the climate system. There are two potentiometers (red color) on the left side that provide feedback of the flaps’ position.

I pulled the glove box out of the car so I could access the blend flap motors. I was able to detach both of them and then stick a flat bladed screw driver into the holes to manually try to move the doors by rotating the screw driver.

The lower blend flap seems to mover quite freely and smoothly through about 180 degrees of movement. The upper blend flap door however only moves about 10 - 15 degrees. It does move since when I rotate it sharply with the screw driver in a counterclockwise rotation I can hear it clank against something.

What do the two doors do? I.E. by moving the lower one versus the upper one, what am I doing? If the upper door is somehow restricted from it’s full movement, could that be my no heat problem?

This car has been in a few accidents, one of which prior to my ownership in 2007 was bad enough to set off the airbags (thus why it has a passenger’s glove box instead of an air bag which would normally be there in a MY94 car). Is it possible that something has come loose down inside the heater box and thus restricting the movement of the upper door?

I have to agree with Joe, I believe the one or both of the blend doors are at fault.

The strange thing about this system is that even when you’re selecting full hot, the A/C system is still operating. Sounds crazy but Jaguar does this to dehumidify the hot air.

If you want to know all about what the system does and how the blend doors operate in the different modes (hot or cold) check out this, just select the green download button …

… spend a little time studying it and you’ll know everything there is to know about the climate control system. As Hanz and Franz would say “Yah yah, listen to me now und believe me later”

The upper blend flap door however only moves about 10 - 15 degrees. It does move since when I rotate it sharply with the screw driver in a counterclockwise rotation I can hear it clank against something.

My guess is one or both of the defrost flaps have broken, dropped down, and jammed the upper blend cylinder (we call them blend ‘flaps’ but as can be seen from the system documentation the link to which Grooveman provided they are partial cylinders). The only real fix involves removing the dash top.

While anything is possible I just can’t picture how a demisted door (they’re quite long) could come loose from both of it’s hinges and then find it’s way all the way over into the upper blend door. That said the two demisted doors are definitely prone to breaking where they’re attached to the vacuum actuator … VERY common problem.

Steven, if it hasn’t been addressed in your car yet the odds are excellent that because of the age of the car …

Regrettably the ONLY way to repair any of these is to remove the dashboard (no small job).

I thought I could detect by feeling the hoses that the inlet hose was much warmer than the outlet hose leading me to believe that the heater core could be clogged up.

Because the hoses weren’t hot I have to agree with Joe that the hot water valve is malfunctioning, possibly the flaps are too.

This feeling of temperature difference was BEFORE I back flushed the heater core. Now that I have done this the temperatures of the two hoses are more even.

Also even before I flushed the heater core, the inlet hose on the firewall side of the heater valve was hot. If it was the water control valve I would have thought both hoses would be cold or “coolish”.

When the car has been running for more than say 15 minutes, does the temperature guage always move to the middle, more or less covering the ‘N’ ? Does it remain on the ‘N’ while driving the car out on the road ?
If the guage drops to the left of the ‘N’ by one segment or more during normal driving conditions the Engine thermostat will most likely be stuck in the fully open position and the coolant won’t get hot enough to provide decent cabin heat. I’ve had this problem on both my XJ40s in the past.

No, the coolant temperature is very steady, centered in the gauge. Also the thermostat is new as of this summer when I replaced the head gasket and rebuilt the cylinder head.

I don’t know if you researched threads in the XJ40 archives on this subject, but if not, this thread discusses that problem with some checks you can do -

I have owned the wonderful 1994 xj40 for 10 months, I don’t have a owners manual, but I know the heater worked better in the winter and I have tried all the buttons and switches and I can’t figure out if I have a problem or not. I do get warm air to the floor vents for the front seats and I get warm are to the back seats. The temperature control knob does change the temperature of the air coming out of those vents. When changing to defrost and not defrost it sounds like the solenoid or… 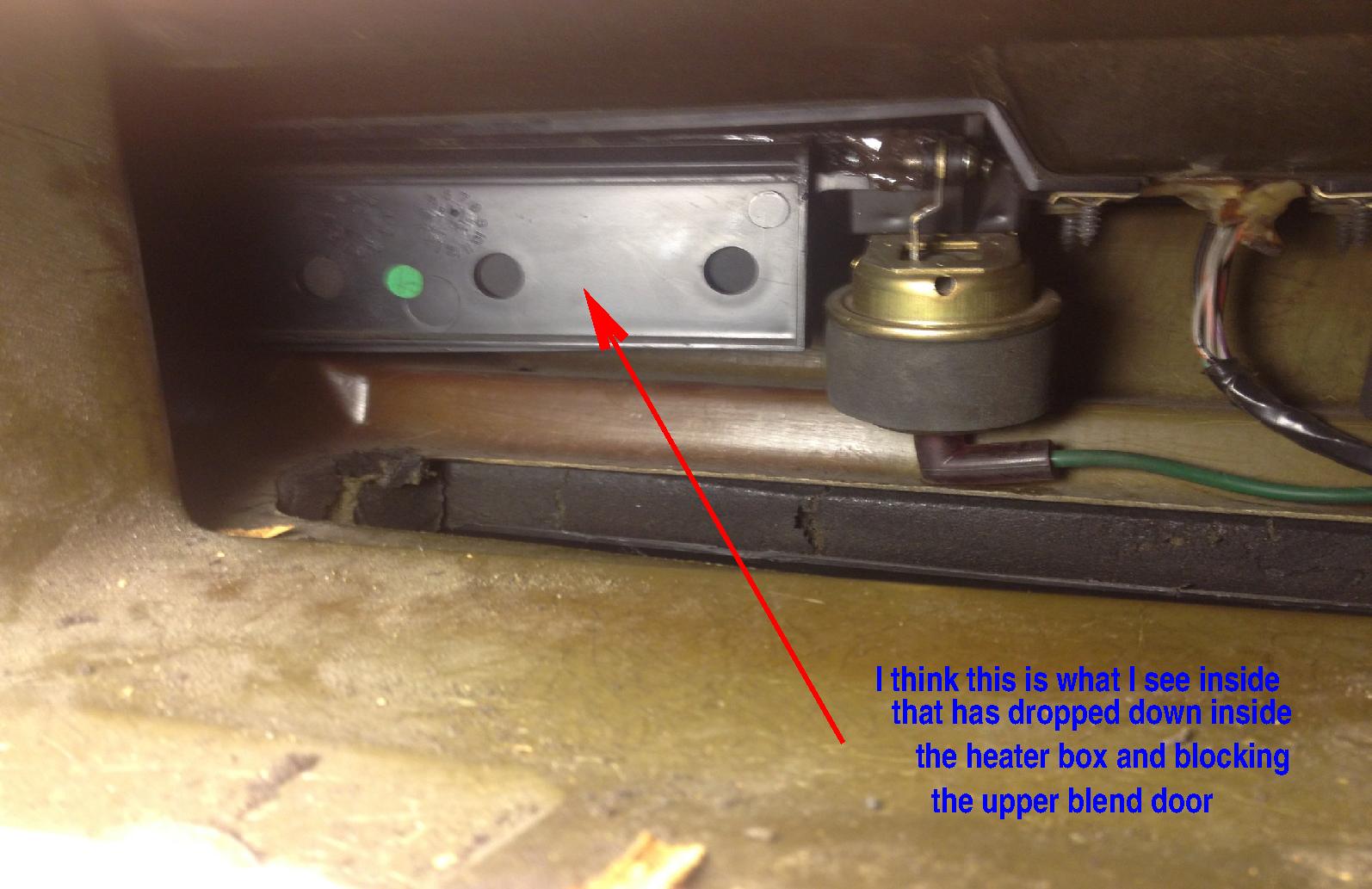 So after discovering this Don B persuaded me that I needed to remove the dash to get to these dropped defrost flaps.
I have successfully removed the instrument cluster and I got the dash top assembly loose but not out.
I have each end of the dash top assembly loose and after locating the two screws that go down into the top of the center console, the dash assembly is almost loose but there seems to be something still attached at the front center edge, closest to the windshield at the center of the car. I tried removing the screw that held the demister grills onto the top of the dash but that did not gain me anything.
So I think what is holding me up from removing the loosened dash top is the two defrost flaps that have fallen partially down into the heater box.
So this means I need to move those vent flaps before I can pull the dash top out but I cannot GET to the fallen vent flaps until I have the dash top out!

Since as it was 1:30AM in the morning I decided to call it a night. I put the instrument cluster back into the car and I was able to drive it back home.
Unfortunately in moving the semi-loose dash top around, the fallen flaps have moved and the flaps for the center vents are now not able to move as much as before so I cannot even see the fallen flaps inside the box any more.
The dash top is loose and can be wiggled around but is definitely being blocked from coming out by the fallen defrost flaps. 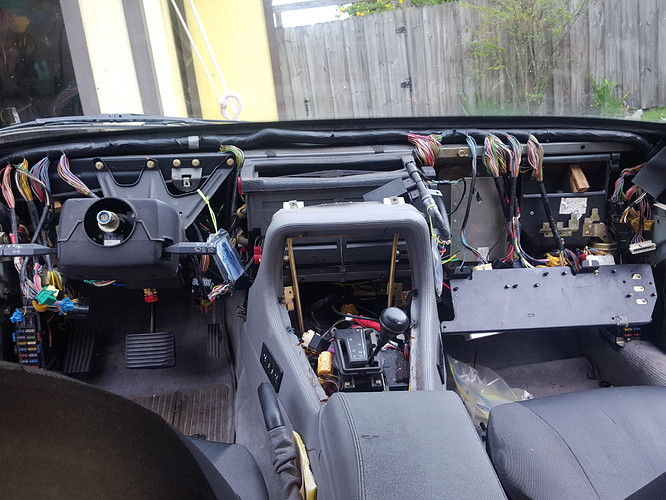 Martin
Thanks for the photo but I am looking for a photo or photos of the actual underside of the dashtop itself.
The underside of the big piece that was taken off to expose what we see in your photo.

Steven, this is the only pic I found in my folders. If you remove the dash completely make sure that the top and the bottom parts are not loose. I had to glue mine together because they separated. 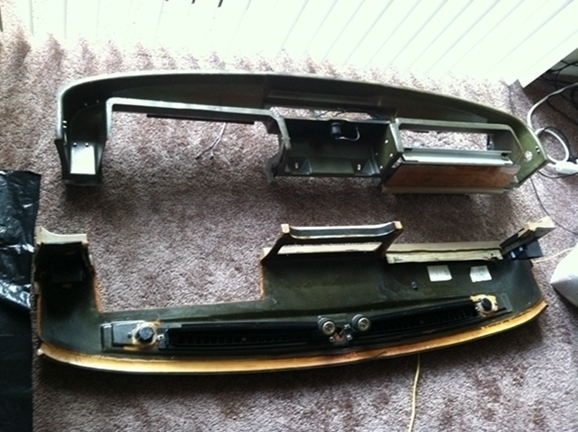 Joseph:
Thank you for the photo but I need a more detailed photo of this area. 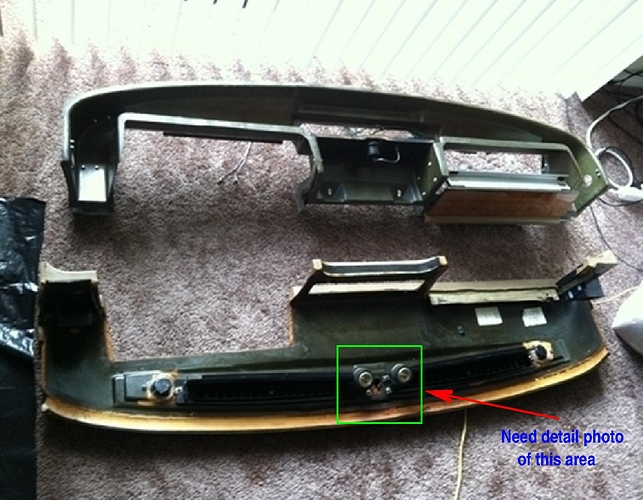 I got this picture. Maybe it’s too close but hope it helps. 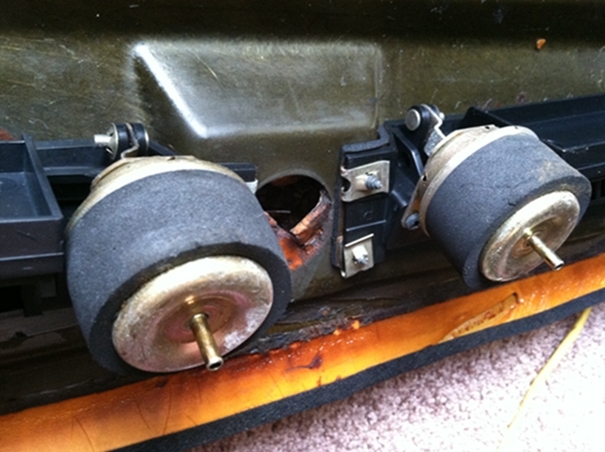