Brake light switch failures and the most beautiful driving roads

This morning met with local British car group for a drive and lunch, weather was spectacular as were the roads and views. A few MGs Triumph and “proper” Mini.
In route noticed three of the cars did not have operating brake lights. Triumph guy always had extra switches because the dot 5 fluid destroyed switch. All others had bad switches, of course I said my original switch had never failed.
These were some of the finest roads I have ever driven, not high speed but roller coaster up and down. Steep grades and cresting at top and not being able to see down and were you were going. I was bottoming out many times and if driven at speed you would be air borne . Beautiful scenery and horse farm estates, and some roads dead ended and just enjoyed the return trips. So we left after stopping for lunch and my friend with Mini calls me on cell phone " you brake lights are out" you must me kidding? no. I have a third brake light that reflects off rear glass and sure enough no brake light unless I pump the pedal. Looks like I will do the electric switch conversion. If I recall correctly didn’t Jerry have a short cut to wiring this up?

Glenn,
Jerry does have a switch on the pedal, believe he put a bungie cord on it to help return the pedal and open the switch. But I think one of the E-type club guys created a write up showing how to make a bracket and which switch to purchase. Maybe Heuer can point you to the drawings. I believe the switch was a Volvo switch. I put one on my car using the recommended switch but made a bracket out of old metal straps that I had lying around. Fastened the bracket to an existing bolt, threaded two wires through the speedometer grommet to the new switch and connected them to the old switch connectors. Did not need a bungie cord.
pauls

didn’t Jerry have a short cut to wiring this up?

Glenn, I did it this way:

In reply to a message from Boffi sent Mon 11 Jul 2016: Mark, Yes, use the existing wires and no cutting or new holes in the bulkhead. First, leave the existing switch as it is. Take one wire from the new switch (a green and purple one if you can find it) and run it to the outer left corner of the dash by your knee (the location you have already located). You can find a 4-way connector that connects three green with purple wires. These are from the hydraulic-switch, to the two side b…

That way the hydraulic switch stays in place as a backup to the mechanical, there is no wire cutting, and it fits right into the harness logic.

Paul, I did away with the bungee cord a while ago, having discovered that the return spring out in the engine compartment did the job. Works fine for me. There are several ways that the pedal was sprung, you need to check that your car’s does the job.

My daughter has an original Mini and the best thing we ever did to it was upgrade the hydraulic brake switch to an electrical one. The number of times I followed her without seeing any brake lights made me very worried and every time we put a new hydraulic switch in it it would only last about a month.

To save me the time and effort of finding correct switch and making bracket , will just order kit from XKs. Do recall someone had a short-cut for wiring this up with out going through firewall?

During my restoration using an all new Autosparks wiring harness, I just routed the brake light switch wires back through the hole behind the regulator and straight to the switch kit I bought from XKs Unlimited.

After having bought “several” of the poorly constructed aftermarket switches, I fabricated a mount and bought a generic mechanical one from a local parts store.
No problems since… glad I did it!!
LLoyd

I added a mechanical switch in parallel with the hydraulic on my E: 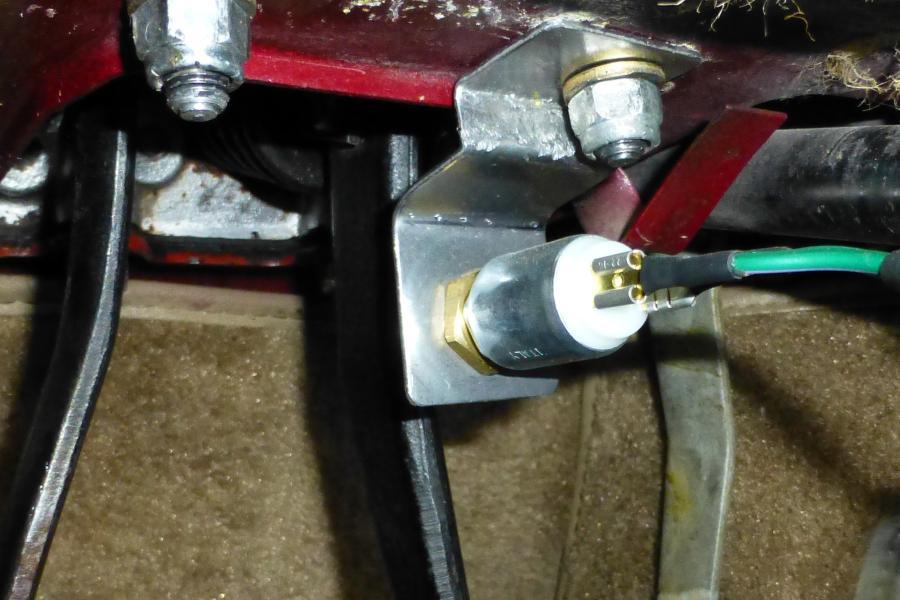 At least on a S2 the wires you need are right there under the dash, far left - so the whole thing can be done with bullets and connectors and w/o cutting.

Switch was a Volvo replacement from Amazon - bracket was made in my ‘machine shop’ which is equipped with an angle grinder, drill, vise and a big hammer. All my favorite tools.

I used to have that problem on my TR but then I added a relay to the circuit so the hydraulic switch only sees trivial current even though I am running five (5!) brake lights on that guy. The current hydraulic switch has lasted 10 years with DOT5 in the system.

bracket was made in my ‘machine shop’ which is equipped with an angle grinder, drill, vise and a big hammer. All my favorite tools.

There’s a plan for the bracket on the UK forum; that’s what I used, along with a more humble “blacksmith shop”…

Yeah - ‘blacksmith shop’ is a better description of my set-up too.

Here are the plans I followed, probably the same ones you mention: 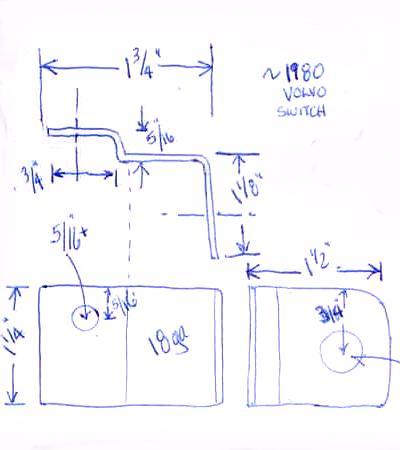 Unsigned so I cannot give credit offhand - possibly Martin S.

Yeah - ‘blacksmith shop’ is a better description of my set-up too.

Here are the plans I followed, probably the same ones you mention:

Great, I’m off to the basement to dig out some scrap sheet metal. I’ve been considering this upgrade for a while. I assume the 3/4" hole is centered in both dimensions, side to side and top to bottom on it’s section of the bracket?

I found that once I got it all fabricated and installed I had to wiggle it around some to get things to work even though made to spec. Permanent after that.

That makes sense. I’m thinking the 5/16 hole should be larger to allow for adjustment. Once clamped between the body and a flat washer and nut it’s not going anywhere.

Here are a couple of photos to show how GM did it in the 70’s on my Cosworth Vega. When I do this I think I might use Geo’s bracket design with this switch since it is a pretty slim switch with a lot of threads for adjustment. 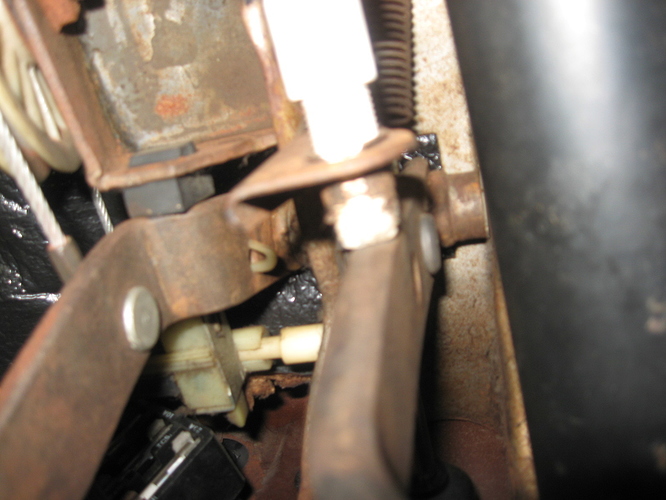 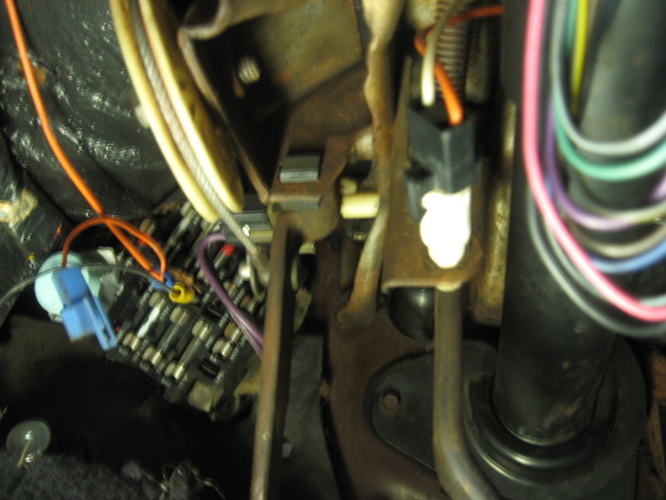 Combine this switch with the LED brake lights, and you get a much earlier brake light, and much more sudden illumination. The UK Forum has a nice review of studies showing the effect of this on following drivers (Thanks David Jones).

I assume the 3/4" hole is centered in both dimensions, side to side and top to bottom on it’s section of the bracket?

Yep, centered. It’s the hole that the barrel of the switch goes through. You might want to buy the switch before you drill the hole so that you can match up the size of the hole with the diameter of the switch. The only fiddling that I had to do was slightly bending the metal so that the switch ended up perpendicular to the pedal lever and then to adjust the height of the switch. I highly recommend this upgrade.

Thanks. I’ve fabricated the bracket this afternoon Now I’m waiting for the black wrinkle finish paint to dry. Found a suitable switch at NAPA part number ATM1433011. I’ll trot by there and order one tomorrow. 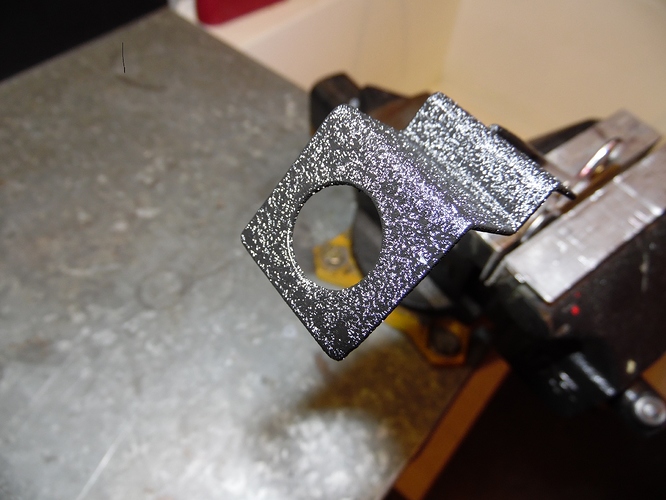 Nice work. I think I’d better delete the photo of that POS bracket I made.

Remember though, wrinkle paint covers a multitude of sins.